Hospitals have the same problem the rest of us have: there's too much to do, but they can't do it all. Medical resources are limited, and hospitals have the serious responsibility of handing them out in the right way. They must prioritize available amounts of medicine, hospital beds, and even money to do the most amount of good for the people under their care.

But according to EarlySense CEO Avner Halperin, one of the most vital limited resources in hospitals isn’t anything they track in their budgets.

“A nurse’s time is one of the most precious resources in a hospital,” Halperin said. “You want to make sure that it’s prioritized, and that when somebody needs attention, they get it — not when they’re crashing, but much earlier.” 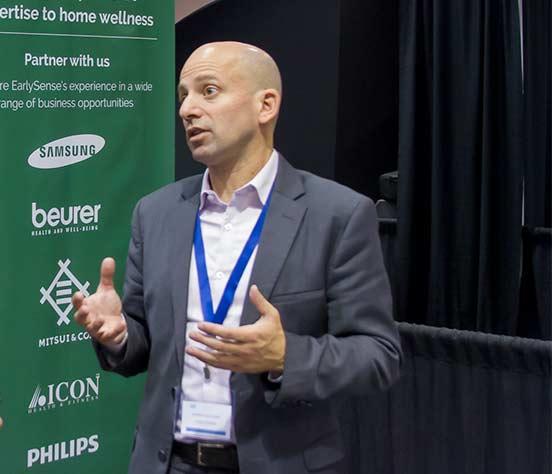 That’s harder than it sounds.

Hospitals want to cut down the number of “Code Blues” — emergency medical situations in which patients need immediate attention. Preventing Code Blues means healthier patients, but it also means that hospitals can safely work with tighter budgets and fewer resources. In order to do that, hospitals have to discover which patients are at the greatest risk of sliding into an emergency health condition.

But deciding who really requires the most amount of attention is difficult. The signs of a deteriorating patient are often hidden — even when the patient is hooked up to conventional medical monitoring equipment. On top of that, false positives are common.

How can nursing staff know which patients genuinely require the scarce attention they can provide in a given day?

EarlySense, founded in 2004, says the answer is better, more intelligent patient monitoring. The EarlySense is a device that contactlessly records vital signs. The flat sensor slides under a patient's mattress and monitors their heart rate, respiratory rate, and motion. This information is shown on a central display station, which helps hospital staff understand which patients need care.

The device uses a piezoelectric sensor, which detects extremely small changes in movement and pressure by converting those forces to an electric charge. It monitors the patient through three main signals. First, it detects the movement of the patient. Second, it collects the respiratory rate by examining the movement of the chest. And third, it records the patient’s pulse by measuring the “cardio-ballistic effect.” This effect is created when the heart contracts and ejects blood, creating a recoil and impact.

It’s “a little bit like a gun being shot,” Halperin explained. When this happens, the body emits a distinct vibration — which the EarlySense detects and registers as a heartbeat.

It’s already been used to monitor hundreds of thousands of patients around the world. And based on a battery of clinical trials, it’s helping hospitals become more proactive in their care — which allows them to serve patients better.

When the EarlySense was incorporated into a spinal cord injury medical unit, the facility saw improvements across the board. Code Blue activations decreased by 50%. ICU transfers decreased by 40%. And most importantly: mortality following activations by the emergency medical response team and Code Blues decreased by 83%.

A study published in 2014 in the American Journal of Medicine found similar improvements. When the device was used in a medical surgical unit, patients spent less time in the hospital, and Code Blue rates decreased.

Continuous monitoring also leads to fewer false alarms. Halperin explained that there are two main causes of false alarms: a monitoring system that physically attaches to a patient might detach, and a false alarm might be caused by a patient thrashing around. Since EarlySense doesn’t attach to patients, those aren’t issues.

Hospitals, despite being large bureaucracies that are wary of change, have responded positively to the technology. “What we see time and time again is that hospitals first try the system, usually on one floor,” Halperin said. “After seeing the accuracy and the outcomes, they expand their installation.”

It’s even made the leap to primetime television, appearing in medical dramas like Showtime’s Nurse Jackie and USA Network’s Royal Pains. But now, EarlySense is preparing to take the technology out of the hospital and into your home.

Live By EarlySense: Monitoring At Home

Later this fall, the company will launch Live by EarlySense. The device uses the same technology as those found in hospitals and sends the data to a smartphone. When you sleep at night, it records your heart rate, respiration, and stress level, and then uses that information to deliver a sleep and wellness analysis. 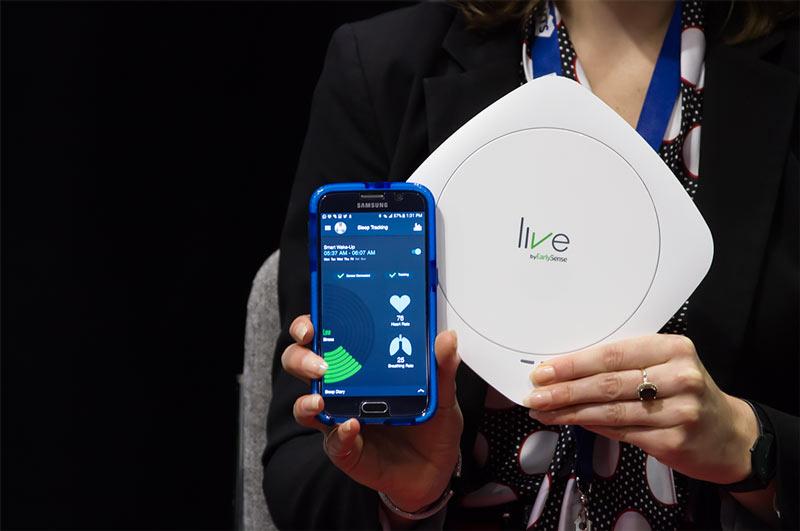 This amount of data can make it easier to keep more patients out of hospitals — which, after all, is an ongoing struggle for the health care system. The device can send alerts when a patient’s vital signs indicate that a dangerous change in health. And when vitals are within a healthy range, it gives patients confidence that they don’t need immediate, professional care.

Giving people access to hospital-grade technology in their homes might even completely change how we think about long-term care. People who otherwise might have been confined to a hospital room gain independence, and family members are empowered to care for patients.

“We think it’s even more important in the home environment,” Halperin said. “You can allow the patient and their family, and we think the family is a very important player in this, to keep an eye and motivate the patient to take care of themselves. You create a closed loop environment that doesn’t exist today.”

Live by EarlySense isn’t intended solely for by medical patients who require continuous monitoring. It can also help people who simply want to monitor their sleep and wellness, but want something more accurate than a Fitbit. “This is leveraging a proven medical technology that is making its way from the hospital to the consumer world,” Halperin said. “The sleep analysis is based not just on motion, but also on breathing and heart rate variability to get a very accurate analysis.”

For the device geared toward medical professionals, EarlySense worked hard to transform massive amounts of data into something sensible. “In a hospital, before EarlySense, nurses got about six readings of vital signs a day,” Halperin said. “With EarlySense, they get 160,000 readings a day — so a very large dataset. But a nurse only gets one or two alerts based on that data a day.”

In a home environment, it’s even more important to distill massive amounts of information into something that leads to better patient care. “People have very low capacity for getting data thrown at them,” Halperin said. “It shouldn’t do that at all. It’s our job as a big data company to devise all these algorithms that give you very little data at the end that leads to good outcomes.” 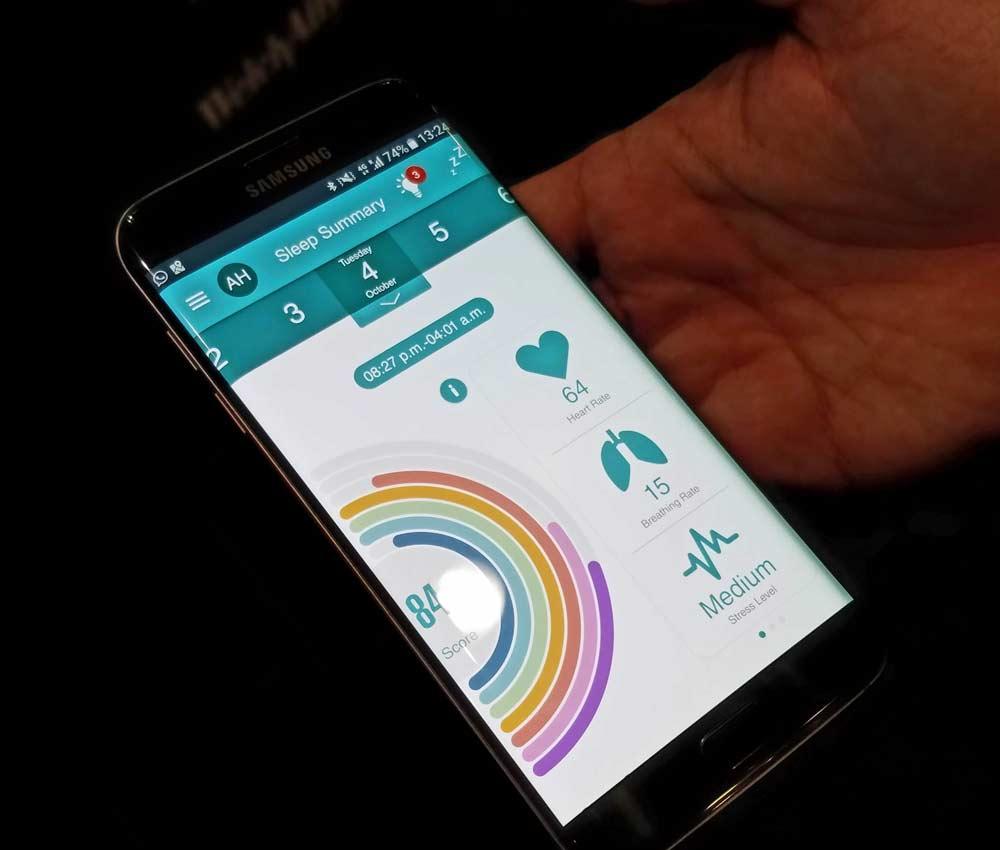 Preparing For The Future Of Health Care

Halperin is adamant that technology like EarlySense isn’t just a helpful upgrade to our health care system. It’s absolutely critical if we want everyone to get the care they need. The forces of rising health care costs, shrinking budgets, and an aging populace threaten to damage our system as it stands today.

Devices like the Live by EarlySense can help us prevent a Code Blue emergency for the hospital system itself. If we don’t make serious changes, our health care system could break from the pressure of caring for massive amounts of people. Soon, keeping patients at home won’t just be nice — it will be essential.

It’s our job as a big data company to devise all these algorithms that give you very little data at the end that leads to good outcomes.