Want to bring a metrics-based approach to action sports? Then the Trace, an action sports tracker, might give you the numbers (and the data-enhanced video) that make your stats-loving heart sing. It collects reams of info about your session and syncs with your GoPro camera, making it easy to gain performance insight. 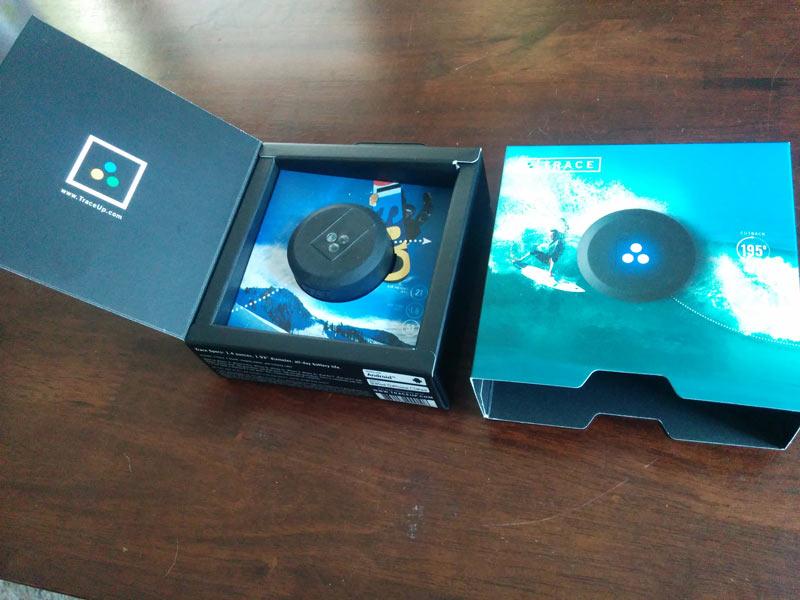 Trace is designed to be used for action sports. I'm a surfer, so I mounted it to my board to see how it performed during my sessions on San Diego waves. In order for the device to succeed, it has to gather accurate data and make it useful for your average surfer. Most importantly, it has to be safe, even when you’re gliding at 20 miles per hour. 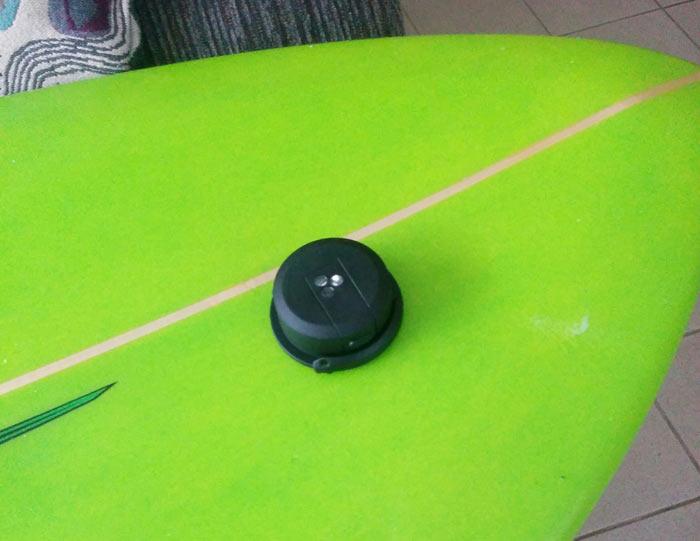 So how does the Trace stack up?

The device uses a GPS signal to record your position, a compass to establish your direction, and a gyroscope to record your movement. It then uploads this data to your phone after your session.

When the GPS worked, it pinpointed my Trace with remarkable precision. I tested it by walking along a street, and it seemed to accurately spot my location within just a few feet. However, I ran into some connection issues. During a few surfing sessions, I started paddling out rather than wait for it to sync. It took a few minutes to find a GPS signal about 75% of the time.

Trace looks like a small hockey puck with a button on the side and lights on the top. The three lights indicate when the device is on, synced to GPS, and recording. While it's looking for a signal, it blinks orange, and turns solid blue when connected. Tap the button to record (indicated by a blinking blue light) and tap again to stop (indicated by a solid blue light). You can leave it recording data during your entire session, so there’s no need to stop and start again.

The app features a map that traces the route of your entire surf session. You can see where you paddled out and where you surfed back in. The app gives you a good sense of the average length of your runs, and it lets you see which runs were atypically long. 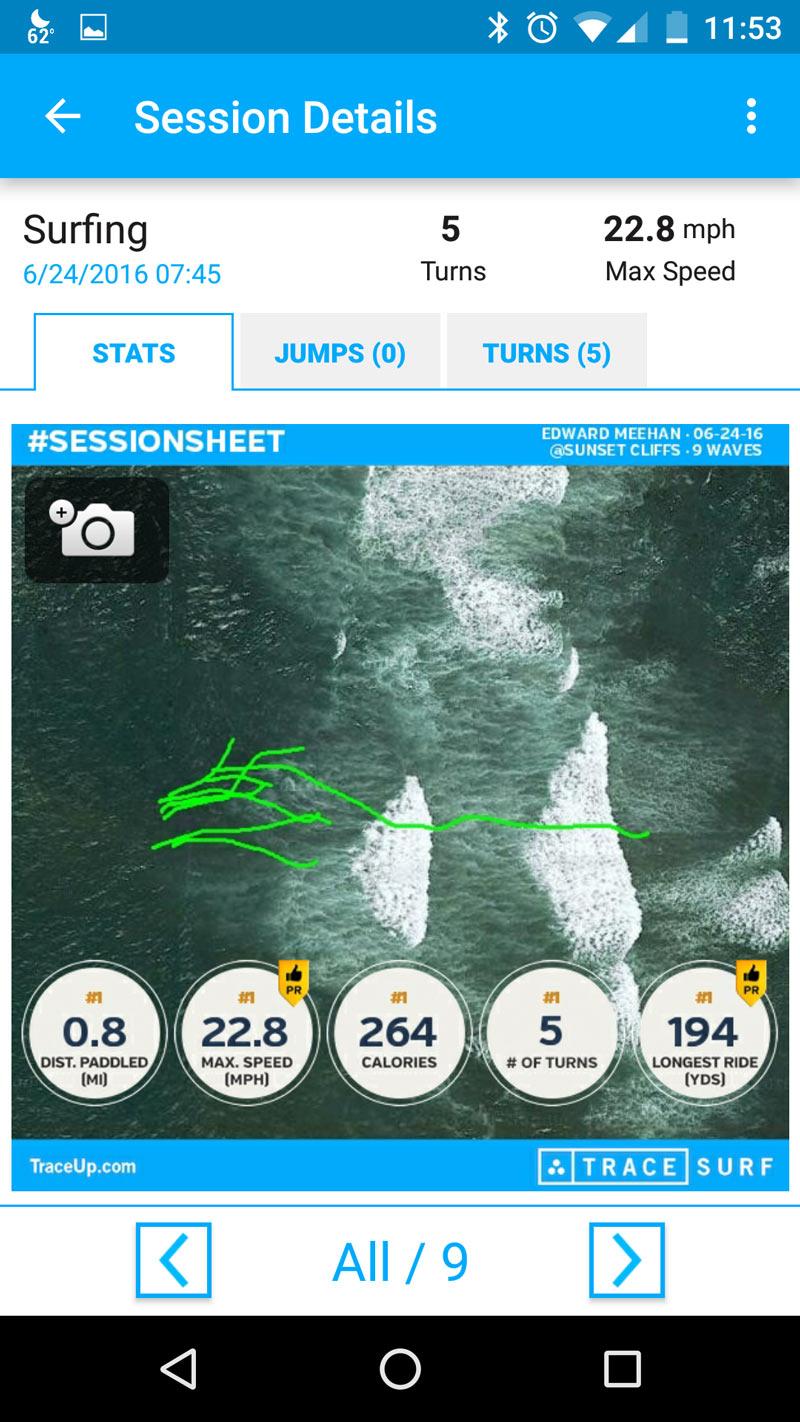 Some of the stats were fascinating, such as the speed of my fastest wave. But the raw, unfiltered numbers felt overwhelming. Trace seems like it would be useful to a pro, aspiring pro, or just someone who is serious about beefing up their surfing skills. But for most recreational surfers, it won’t enhance the experience. I was hoping to see more data visualization that could let me see my surfing performance at a glance. Instead, I got what felt like a bunch of Excel spreadsheets. 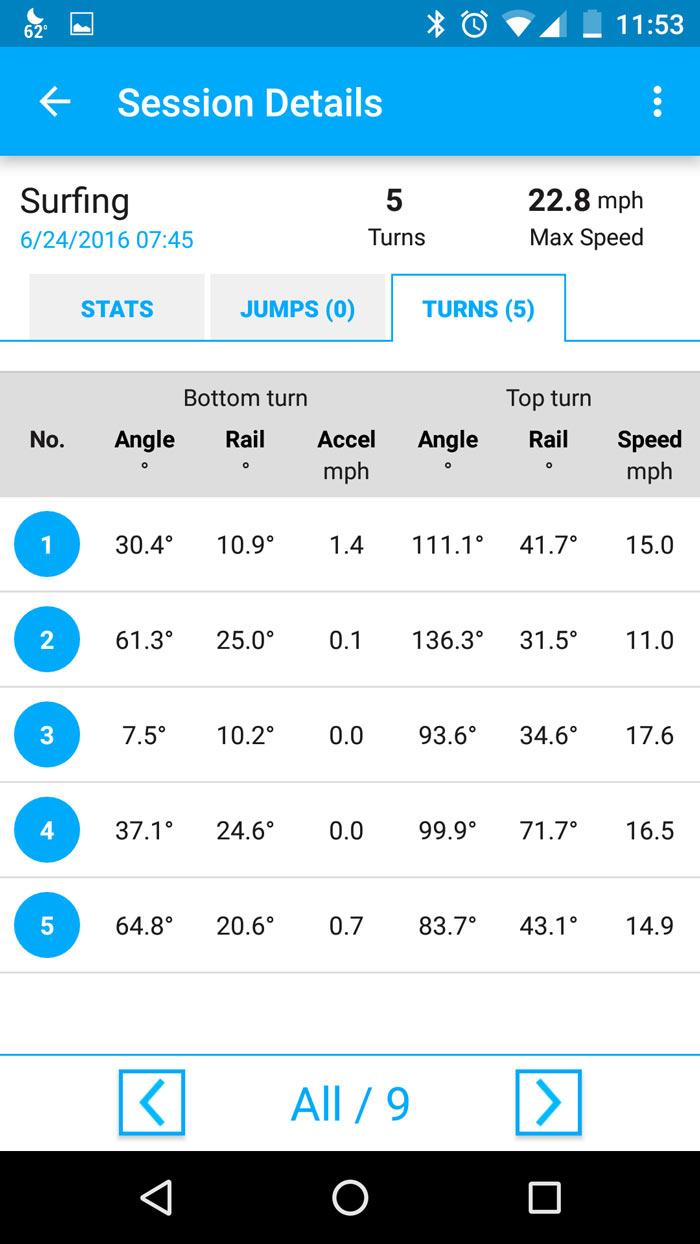 I also would have liked to have seen more info about places I surfed, using data from other Tracers. If Trace already has this data, why not reveal which parts of the wave are the fastest or give you the longest ride? (It’s possible local surfers wouldn’t appreciate this info being available to just anyone who rolls up on their beach.)

When Trace is synced with a GoPro camera, it can automatically overlay stats about your session on top of the video you recorded. The data includes your location, the length of your ride, duration, speed, spots where you cut back, and the arc of your cutback in degrees.

The charger plugs in through USB, so it’s easy to find a place to charge it up. The lights on the device indicate when it’s charging and when it's done. Battery life seems good — it lasts 7 hours on a single charge, according to the company. I was able to use it a few times before it needed a recharge. The device doesn’t include a battery life indicator, so you’ll need to check the app to know how much juice it has left.

For an action sports device, the Trace is a little big, especially for surfing. It seems to be made out of plastic, and it has a hard rubber outer shell. While I personally didn’t have any problems when using it, I doubt the rubber is enough to completely protect surfers. I have a scar on my shin from when I collided with my board-mounted GoPro while I was surfing, and I can imagine the Trace posing a similar hazard. While its position on the nose reduces the risk of an accident, I would feel more comfortable if it had a lower profile. 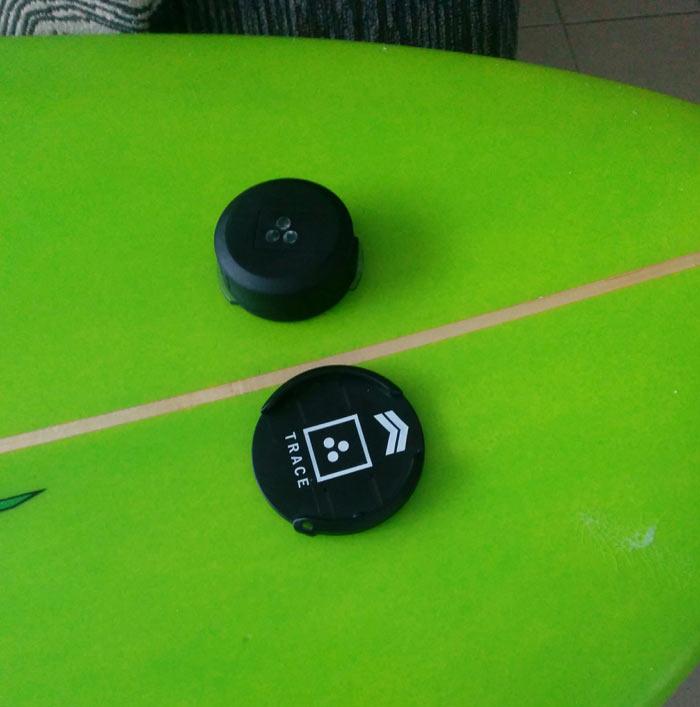 Because the Trace is a GPS device, you need to align it with your board stringer so it knows which way your are facing. You attach the device by setting it on the mount and turning it about 90 degrees. It can only mount one way, so you can’t put it on backwards by accident. For paranoid surfers, it comes with an optional leash string attachment.

Trace gives action sports videographers an easy way to enhance their videos. But it lacks a few key features that would make it useful for most recreational surfers and action sports lovers.