Even if the benefits I experienced are genuine, they were pretty mild and don’t overcome the Elf Emmit’s massive problems.

Brains are surprisingly flexible things. One of the most startling discoveries of neuroscience is that we have the power to shape how our brains grow.

For example, neuroplasticity allows the brain to make new connections throughout life. Regular meditation can increase the thickness of gray matter. There’s a community of people who experiment with nootropics, drugs, and other techniques that help improve cognition.

And thanks to a new wave of wearables, you can even up your brain game with the latest in neuroscience. 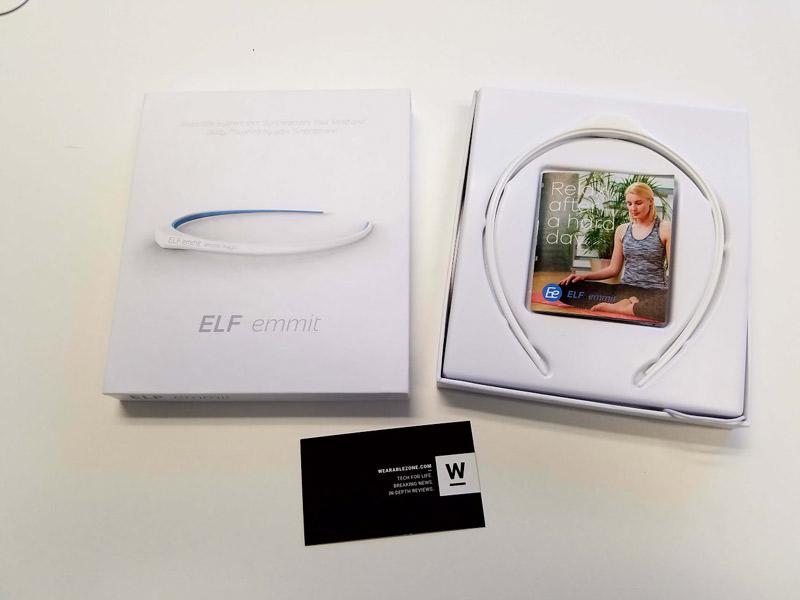 Does it work? Maybe. I possibly felt some impacts in mental performance, but they were so mild that I can’t honestly say they were due to the device or some other factor.

To help me better understand the Elf Emmit, I sought the opinion of a senior neuroscientist who works with high powered brain-stimulating magnets in a laboratory setting and showed him the device. He explained why a portable brain stimulating device could certainly work in theory — and why the Elf Emmit might have too many technical flaws to justify its $129 price tag.

As someone prone to distraction, I was eager to try the concentration feature. Frankly, it’s possible that zapping electromagnetic waves into my brain is healthier for me than the amount of coffee I drink on a slow day.

According to Elf Emmit, “Concentrate” mode makes the device emit a electromagic frequency of 18 Hz for 120 minutes. I used the device for five days, two hours at a time, while I worked at my computer. I certainly felt a smidge more focused, and I was more eager to polish off whatever I worked on before grabbing a snack or water. But it’s harder to nail down a cause.

The device itself was snug against my head. That small amount of discomfort might have spurred me to be more aware. And of course you have to factor in the possible placebo effect. I wanted the device to work, so I might have been hyping myself into making it work.

When I asked my expert how I would know whether or not it’s working, he said, “You should feel it.” In his experience with laboratory-quality devices, the influence of electromagnetic waves on your cognitive function should be obvious. I certainly can’t say it was obvious that the Elf Emmit was helping me.

I tried using it on him. He slipped on the device and told me to switch it on randomly to see if he could sense when it was working. He couldn’t.

When WearableZone writer Rebecca Paredes tried to use the device, she had to stop after 20 minutes because she got a headache. The included booklet warns that this might happen, saying, “You may experience a headache and other painful sensations during or following the application of stimulation.” The neuroscientist explained that this is probably due to the device stimulating muscles in the back of the head. That’s not the desired effect, but it’s at least a good indicator that it’s doing something.

I’m a bad sleeper, and I have the Fitbit data to prove it. I take forever to get to sleep, and frequently get up in the middle of the night to get a glass of water. Sometimes, I even suffer bouts of insomnia.

To see if it could help my sleeping woes, I tried using the device for a week, then compared the quality of my shut-eye against the previous week.

Here’s week one, before I used the device. I averaged six and half hours of sleep a night. 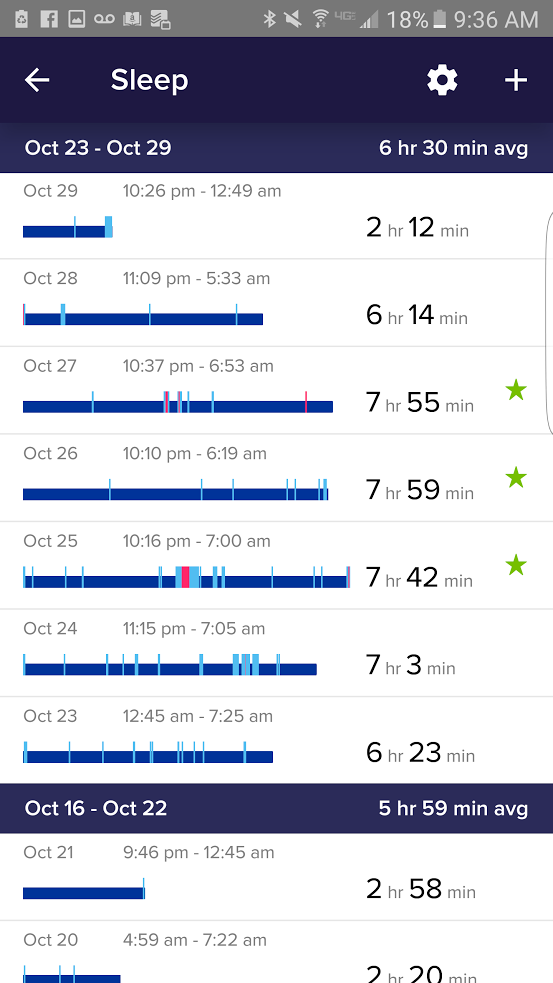 And here’s week two, with the device. I averaged a slightly better six hours and 58 minutes a night. 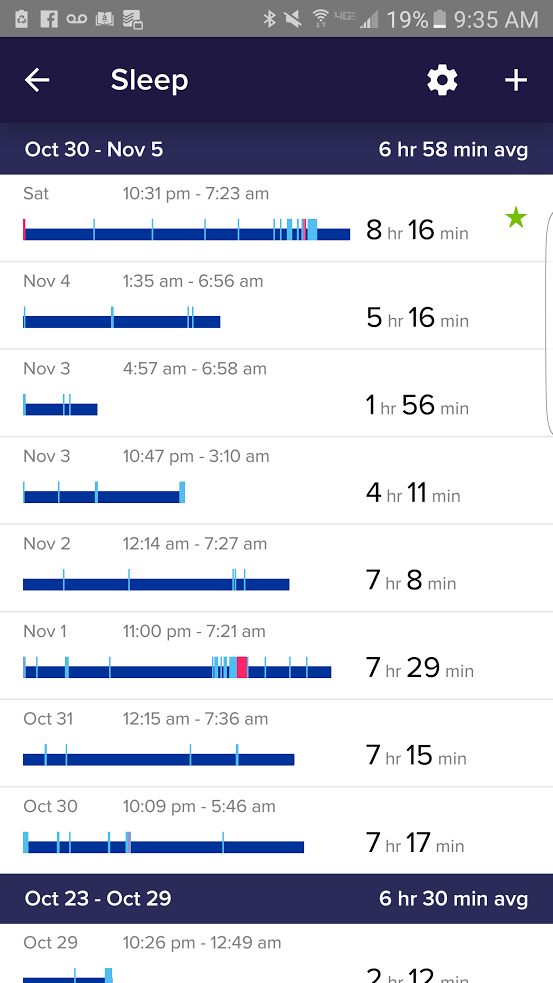 While acknowledging that it’s possible that my better-rested week is due to other factors, I want to give the Elf Emmit the benefit of the doubt. It’s possible those electromagnetic waves gave me a few more Zs.

The device itself, however, is difficult to wear to bed. I couldn’t rest the back of my head against my pillow, since the Elf Emmit juts out. Sleeping on my side was a little better, but still slightly uncomfortable.

There's also an app that allows you to choose different programs, but it doesn’t provide a high level of functionality. It essentially lets you do three things.

In order to choose which program you want, you have to swipe between the options. Since there are only five, I’m not sure why each one has its own screen with a giant button in the middle. It would have been simpler to just have all five functions on one screen. That way, you wouldn't have to thumb over three times just to switch from “Meditate” to “Deep Learning,” for example. 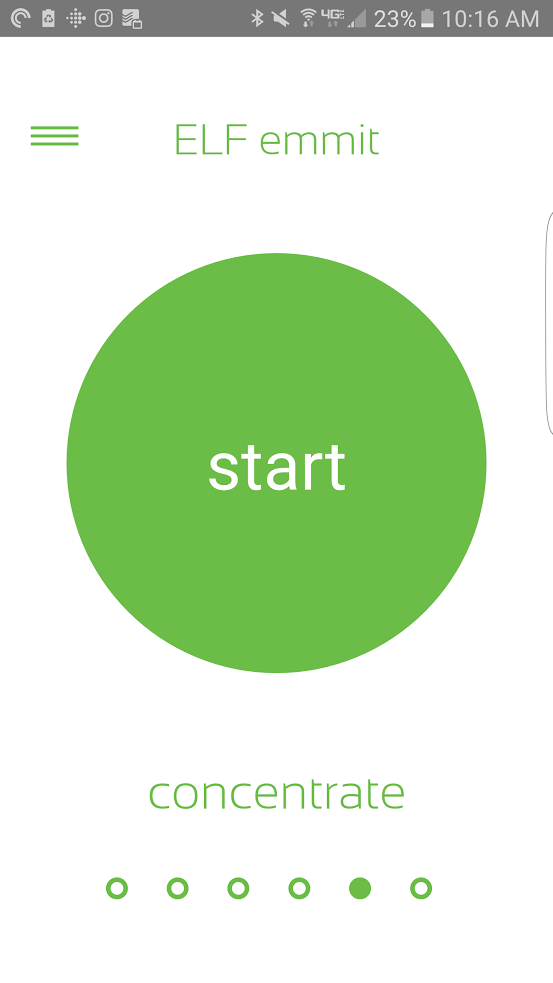 You can select between four different colors of the menu and giant buttons. Maybe there are people who can’t achieve a level of intense concentration or zen serenity if their app is the wrong shade, but I’m not one of them. Considering even major apps (like the Facebook app) don’t let you customize colors, this level of personalization for something so simple seemed unnecessary. 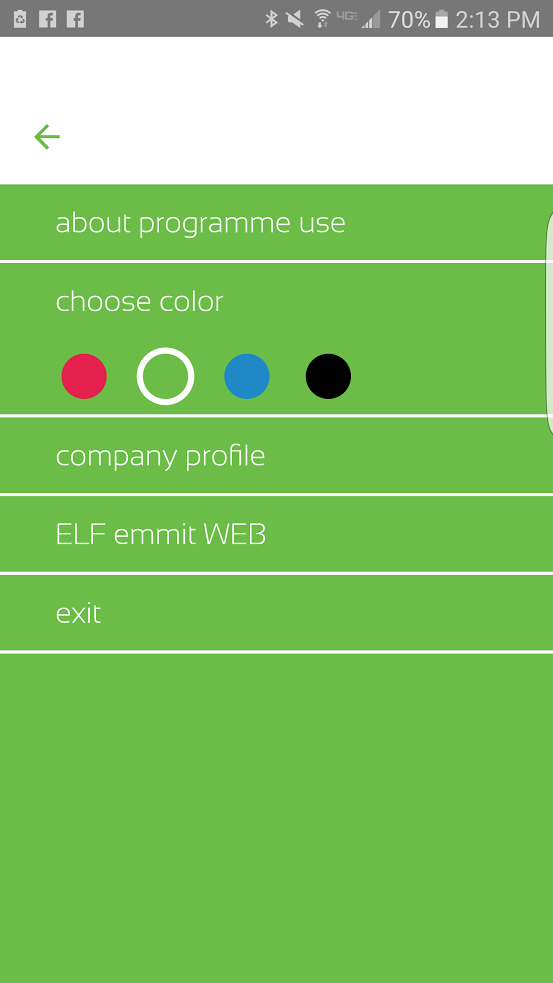 3) Explain How Each Program Works

The app also explains how each program works. But, for some reason, it does this in a teeny-tiny, hard to read font. Here’s the explanation for “Anti-Stress.” Notice how much white space it leaves on the screen of my Samsung Galaxy S7 Edge. 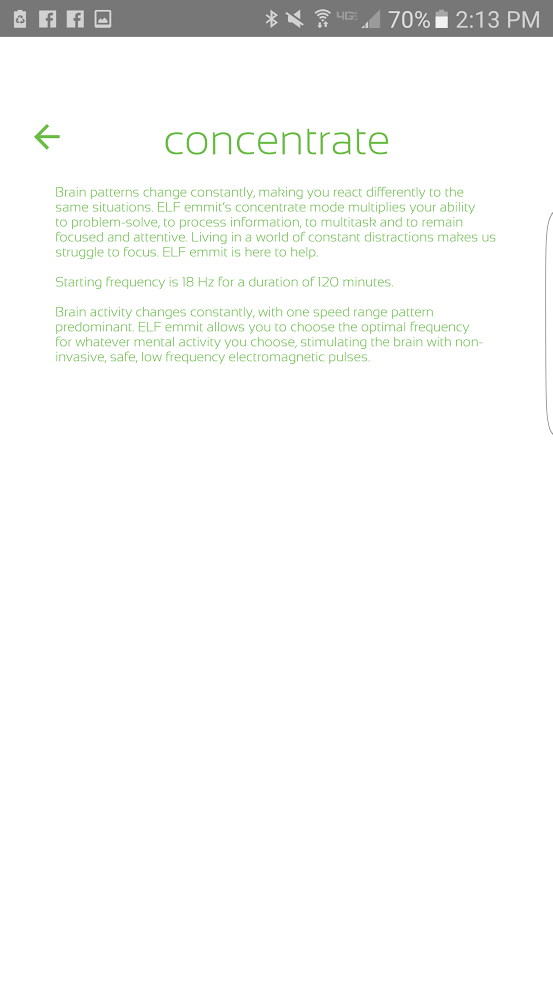 Frustratingly, while you’re in the app, you have to stay on the program in order for it to work. For example, if you’re using a particular program and want to see how it works, the program stops working when you pull up that information.

But stranger than that, the app is technically unnecessary. Since all it does is change the frequency of the waves and power the device, it could be replaced by a rechargeable battery, five buttons on the device itself, and a small computer to process the program settings.

Possibly, the creators of Elf Emmit opted for the smartphone route in order to decrease the cost, but in exchange, it makes the device more inconvenient. In order for it to work, you have to always have your smartphone on hand.

On top of that, the app was prone to crashing. I frequently got this error when I attempted to open it: 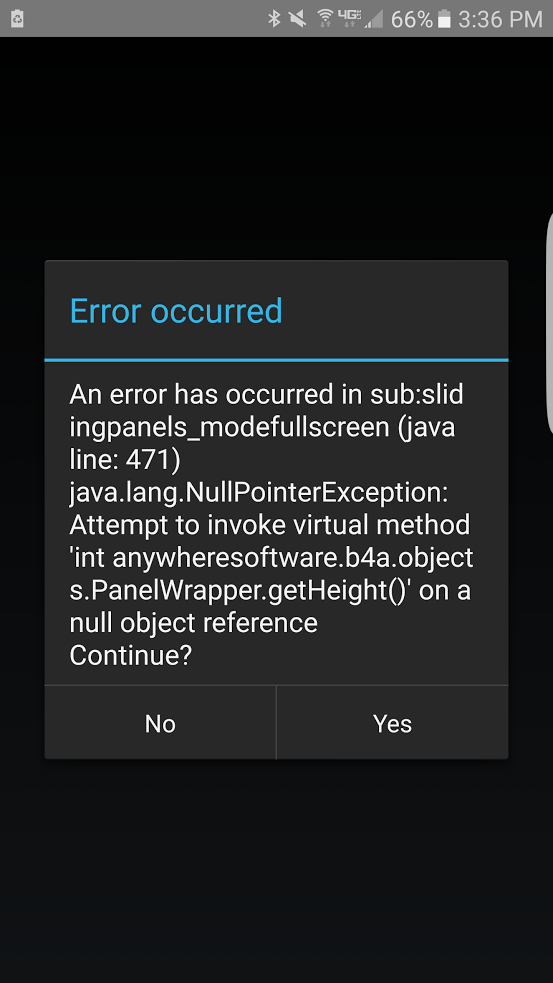 A glance at the app’s Google Play page confirms that this was a common problem.

The device itself is a thin, white, U-shaped piece of plastic. The image of the box makes it appear like one singular unit, but you can see all of the seams from its assembly. The design doesn’t evoke a brain-changing miracle as much as a plastic headband you earn at Chuck E. Cheese for five tickets. 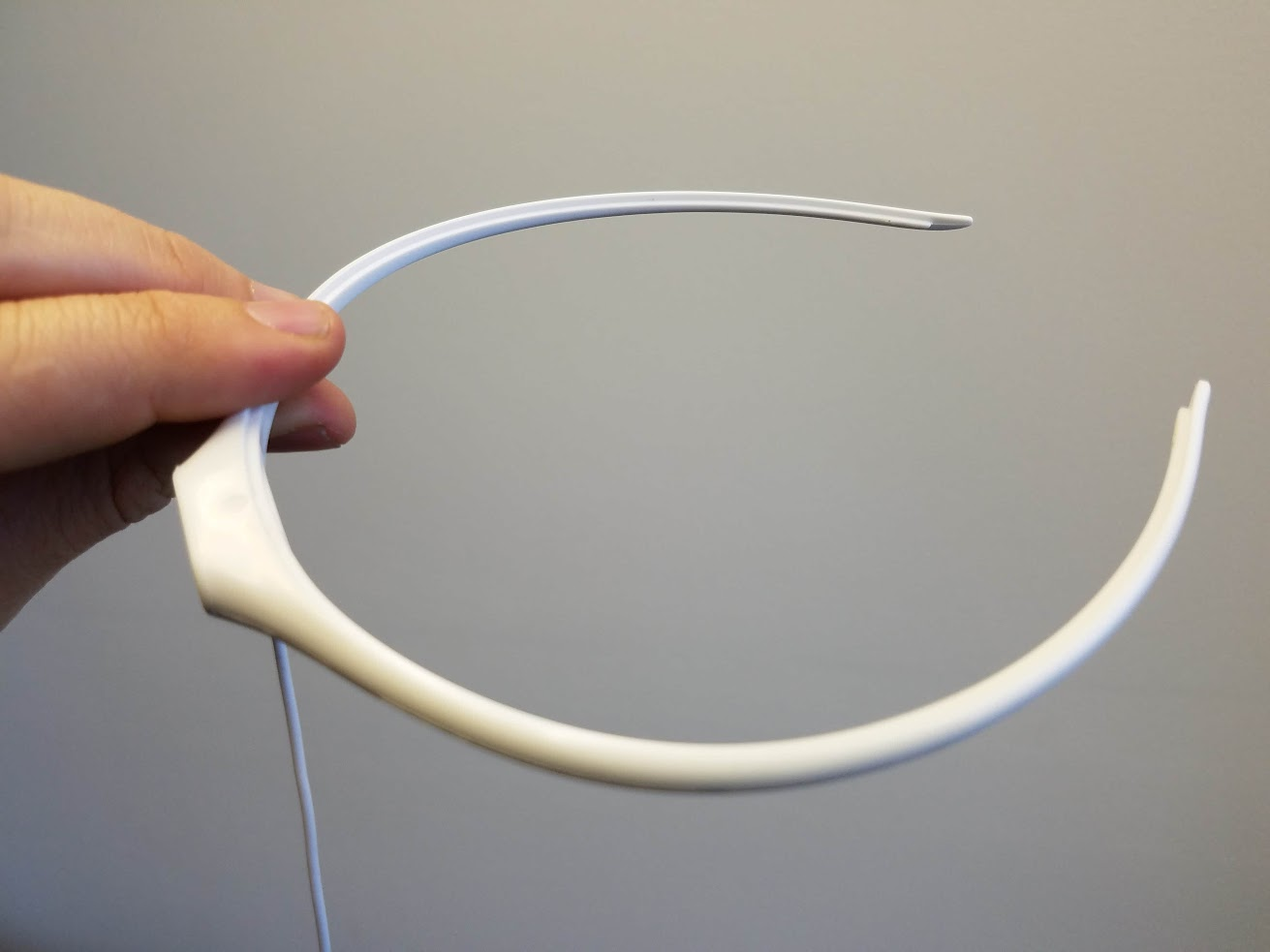 The image on the box (and on the website) shows a two-toned device that’s white on the inside and blue on the inside. But the actual device is available with five different colors lining the inside of the band, and in all honesty, the all-white version isn’t impressive in person.

But on top of that, how the device was designed created two big, practical problems.

When the Elf Emmit uses your headphone jack, you can’t use it for anything else. If you get a call while using it, you’ll have to unplug it in order to talk to on the phone. You can’t use your smartphone to listen to music with headphones and use the device at the same time. And if you want to listen to a guided meditation app while using the Elf Emmit’s meditation program? Tough luck.

Of course, this also ignores the fact that the most recent iPhone has ditched the headphone jack altogether, which seems to indicate the technology is beginning to be phased out.

My neuroscientist explained that there was a lot of potential for someone to place the device incorrectly on their head, so it’s almost useless. “One of the issues you have when you have a lower power device is that the magnetic field falls off 1 over 2 Pi r squared,” he said, while I nodded my head like I understood what that meant. “As you get the distance squared away from the source, it falls off exponentially. The problem I have with the devices I use is that even if I’m a centimeter off the skull, you barely feel it. You might get into the muscle, but there’s no guarantee you’re getting into the cortical tissue.”

After some Googling, I learned that “cortical tissue” is the outer layer of tissue of the brain.

Essentially, since the device isn’t particularly powerful, you have to position it perfectly in order to work properly. And since it’s hard for a non-expert to know precisely where to place it, and the device itself slides around a bit even when you put it on.

Even if the benefits I experienced are genuine, they were pretty mild and don’t overcome the massive problems with it. To sum up, it gave my colleague a headache, the app was clunky in design and crashed constantly, and an expert I consulted said that it probably won’t work for most people.

This technology certainly has the potential to bring proven cognitive treatments into people's homes and offices. But the device that helps people zap their brains instead of drinking energy drinks or taking sleeping pills in order to perform at their peak won’t look like the Elf Emmit.

No idea if it works!

It might, but who knows? The principle seems sound. However, the design is such that it just slipped...

Product did not work for me. It was difficult to keep it on my head. Never felt any different. Buyer...